The actress asked on social media – Mr. Gavaskar, how can you accuse his wife of being a husband? – DroidBuz.co | Daily Bollywood News

Anushka Sharma has expressed her displeasure over former cricketer and commentator Sunil Gavaskar, citing her name in the ongoing discussion on Virat Kohli’s performance during the IPL match. At the same time, he also gave an answer in his favor through social media.

Anushka replied to Gavaskar via an Instagram story that your message was not good, and how can you blame a wife’s husband for his bad acting?

We should both be respected

Anushka wrote in her post, ‘Mr. Gavaskar, the truth is your message was a bad idea, but I want to tell you something. Why do you think of making such a statement to the wife accused of playing for her husband’s game? “I am sure that when you talk about playing for so many years, you respect the personal life of every cricketer. So don’t you think that me and we (Virat and Anushka) should get equal respect? ‘

When will I stop playing cricket?

She further wrote, ‘I am sure you could have had many more words and sentences in your mind to comment on my husband’s performance last night or your words are only relevant if you use my name. It’s 2020 and nothing has changed for me yet. When will you stop commenting on me pulling me into cricket? ‘

Want to tell how I felt?

Towards the end of his post, Anushka wrote, ‘Respected Mr. Gavaskar, you are great, your name is very much in this gentleman’s game. I wanted to tell you how it felt when I heard you say this. 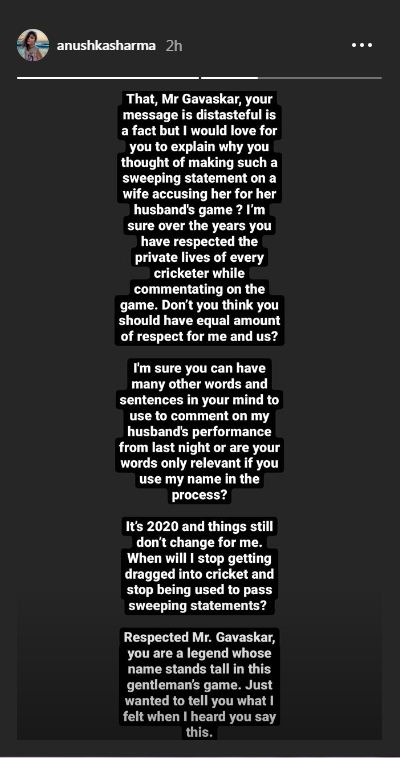 The dispute erupted during a match between Kings XI Punjab and Royal Challengers Bangalore in Dubai on the night of September 24. In the match, Bangalore captain Virat Kohli dropped catches on two important occasions. He then failed to bat and was dismissed for just 11 runs.

When Virat was batting in the match, Gavaskar said, “And he (Virat) wants to practice as much as he can, he knows he can improve.” The lockdown was just Anushka’s bowling practice, she appeared in the video, so there’s nothing to do with it.

Anushka was angry with Gavaskar for this comment. But Gavaskar was talking about the viral video where Virat was seen playing cricket with Anushka during the lockdown and practicing his bowling. Gavaskar’s remarks, on the other hand, were viewed as offensive on social media, and were interpreted differently.