Actors Richa Chadda and Dia Mirza, who are always active on social media, have made new allegations. Richa tweeted that some of her tweets have been deleted and some people can’t be followed. But he did it by Twitter, not by himself. Although Dia says her account follows people she doesn’t want to. 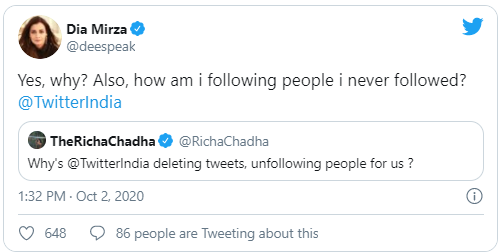 Richa wrote in the tweet – Why Twitter India deleted the tweets. Neglected people for us. While replying to this tweet, Dia Mirza mentioned the same incident with him. Dia writes – Why yes, Twitter India, why I’m following people who have never followed.

But a day earlier, a Twitter user noticed that the micro-blogging site was not working properly on Thursday. However, later on Twitter, it was clear from the handle that the problem had been fixed. See if it works. There may be problems viewing and doing your tweets, we have too. We’ve fixed it.