Mukesh Khanna called ‘The Kapil Sharma Show’ as an airman and a whore. – DroidBuz.co

The star cast of Mahabharata recently appeared on The Kapil Sharma Show. However, Mukesh Khanna, who played the role of Bhishma’s grandfather, did not reach there.

Many famous actors of BR Chopra’s ‘Mahabharat’ were seen as guests on ‘The Kapil Sharma Show’ on Sunday. However, Mukesh Khanna, who played Bhishma Pitamah in the serial, did not reach there. Social media users were regularly asking him questions about it. After which Khanna tweeted a lot and explained the reason. He described the show as ridiculous and silly. However, after a while, he deleted all the tweets.

Mukesh Khanna tweeted six times in a row not to go to the show on Thursday morning. In addition, he wrote the same thing in a post on Facebook. But later all things were removed.

There is no question of calling

In another tweet, he wrote, ‘Now it is true that people will ask me how you can refuse a big show like Kapil Sharma. The biggest actor goes. Surely gone, but Mukesh Khanna will not go. The fool asked me the same question that those people are going to invite us after Ramayana. I told you all to go, I will not go. ‘

The next tweet wrote, ‘The reason is though Kapil show is popular all over the country. But I don’t think more shows are ridiculous. The show is full of continuity, full of dual meanings, turning every moment into obscenity. In which a man wears women’s clothing. He does lustful things and people hold his stomach and laugh.

Colleagues only get paid to laugh

In a fourth tweet, he wrote, ‘I still don’t understand why people are laughing at this show. Place a fellow on the throne in the middle. Laughter is his job. Even if they can’t smile, they get paid for it. Earlier Sidhu used to sit in this work. Now Archana sister is sitting. Work? Just hahahaha. ‘ 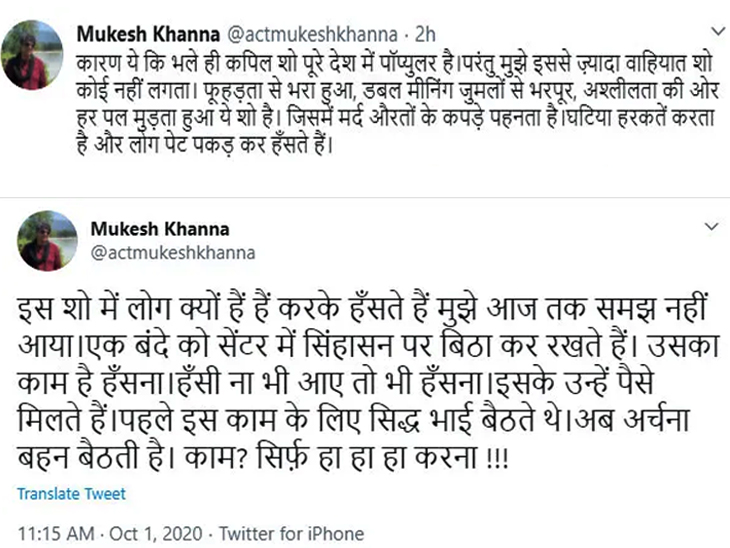 In the fifth tweet he wrote, ‘I will give an example, you will understand how bad the comedy level is in this show. You must have seen it all. Earlier Ramayana show. Kapil asked Arun Gobil. As you were bathing on the beach, one of the crowd shouted … Hey look Ram is wearing VIP lingerie. What will you say? ‘

I would close Kapil’s mouth

In the sixth and last tweet, he wrote, ‘I only saw the promo. Arun Gobil, who walks around carrying a picture of Sri Ramji, just smiles. The world to which Ram sees, how can you ask this lustful question. Arun does not know what he said in reply. If I had, I would have closed Kapil’s mouth. So I didn’t go. ‘ 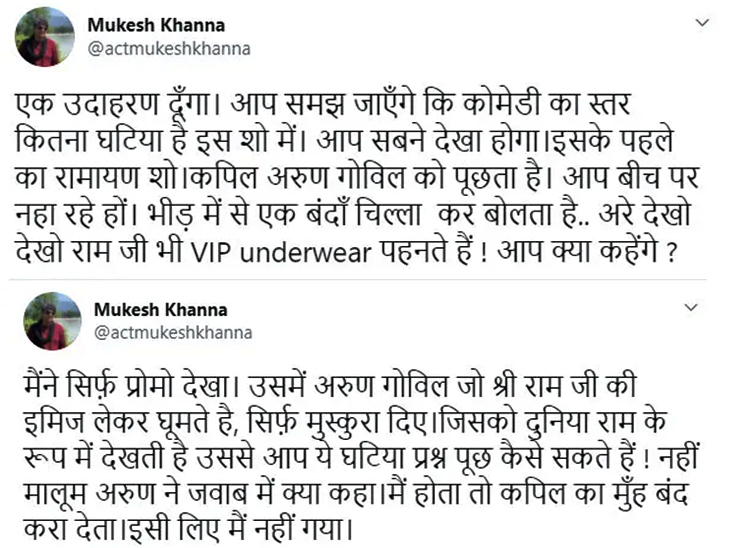 These actors came on The Kapil Sharma Show