Kabir Bedi’s daughter and actress Pooja Bedi has saved Milind Somen with the controversial film. However, his tweet has also involved him in the debate. In fact, Pooja Bedi in the middle of her tweet compared Milind Soman to running naked in the middle and said that if being naked is a crime then all Naga fathers should be arrested. 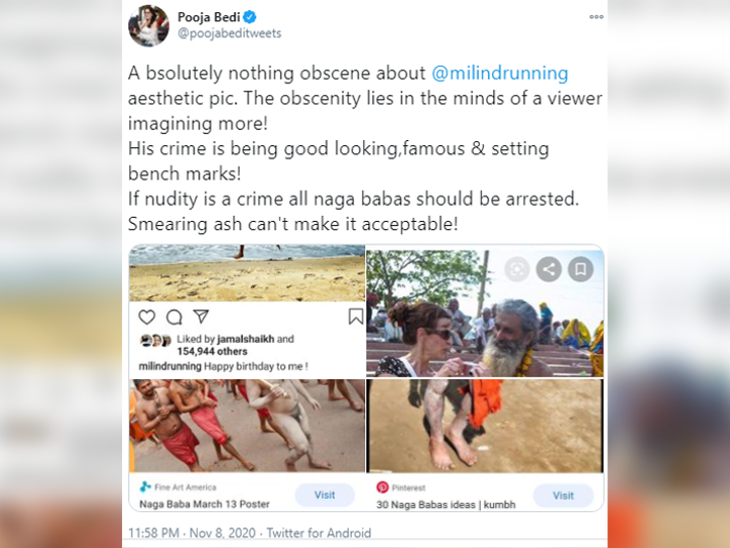 Pooja wrote in her tweet, “There is nothing obscene in Milind’s picture. Pornography is too imaginative. People like to see their crime, become famous and set a standard. If nudity is a crime, all Nagas should be arrested. That is not acceptable. “

Many social media users are trolling Pooja in this tweet. One user wrote, “Your comparison is absolutely wrong. First read how someone can be a Naga father otherwise don’t make such comparisons for cheap popularity.”

Your comparison is completely wrong. First read how one can be a Naga father. Otherwise don’t compare this cheap promotional stunt.

One user wrote, “Sorry. But your comparison is completely wrong. Naga Baba lives the same life every season. Mil

Sorry, your comparison is wrong again. This is the lifestyle of cash in all weathers and conditions. Is it Milind’s life in all circumstances ??

Another user wrote, “This, if a woman shoots something, she is wrong and Milind is right. Why don’t you take a stand for Poonam Pandey? Why this double standard? And insulting Hindus in Bollywood these days? It’s normal.”

If a woman shoots a little bit, then that bad milestone is okay .. why didn’t you take a stand for Poonam Pandey

Why so many double standards .. Nowadays Hindus are abused in Bollywood

One user commented, “They (Naga saints) don’t have social media to show their pass. The comparison is wrong.”

On November 4, Milind Somon posted a picture of himself on social media, showing her running naked on Goa beach. This picture was taken by his wife Ankita Kanwar which went viral.

Goa Police has since filed a case under Section 294 of the IPC (Pornography Act) and Section 67 (Disclosure or Transmission of Pornography in Electronic Form).