How Neha Kakkar said that Rohan Preet’s family met for the first time, the video of a beautiful couple holding each other went viral – DroidBuz.co | Daily Bollywood News

Popular musician Neha Kakkar has suddenly surprised everyone with her marriage decision. It is said that Neha is going to marry Rising Star celebrity Rohan Preet Singh in Delhi on October 24, before which they will have a registered marriage on October 22. Meanwhile, now Neha showed the fans how they first met Rohan Preet’s family. This time Neha looked quite excited holding her husband’s hand.

Recently Neha shared a video through her social media account so that she can be seen with her family at Rohan Preet’s house. In the video, Rohan and Neha are seen holding each other’s hands. The singer writes with it, ‘The day he introduced me to his parents and family. I love you Rohan Preet. Nehru-Preet ‘.

This video of Rohan Preet meeting his family for the first time has also been shared from his account. With this, Singer wrote in a romantic style, ‘He came to our house for the first time. I can’t express in words how meaningful this day is to me. The whole world held my hand. Nehru, I am very much in love with you. To my queen, all my love will be ‘forever’. In response, Neha wrote, ‘Babu, what can I say, I will just say that I am very lucky. Touchwood ‘. 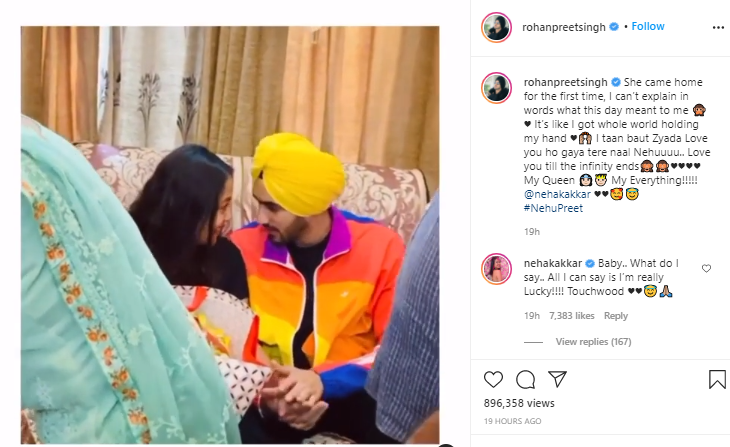 A few days ago, a picture of this meeting between Neha and Rohan Preet went viral on social media. After watching the ceremony in the film, it was said that Neha stopped Rohan Preet last month. Although it is wrong. Recently, a paparazzi shared this video of Neha and named it the Roka show, seeing that Singer made it clear that it didn’t stop her.

Neha Kakkar is getting married on October 24 in a grand ceremony in Delhi. This wedding card also went viral on social media a few days ago. Preparations for the wedding have been completed where people nearby are going to attend. Recently makeup artist Viva asked the guy to guess by sharing pictures made with the bride. Commenting on this, Neha wrote while giving a hint, ‘I don’t know whose marriage it is, but it’s good to see you’.