Collection at the box office from 29 weeks zero, if theaters are launched, Hindi films alone can earn around Rs 3200 crore. – DroidBuz.co

About 7 months have passed since the cinematic lockout caused by the coronavirus. The latest film ‘English Medium’ was released on March 13 and theaters in many states have been closed since then. During this time, many producers took their films to the OTT platform. However, most of the theaters are still waiting to open and due to this, the collection of about 3200 crore Hindi films is stuck.

Trade analyst and Raj Bansal, who has been active in distribution for 40 years, believes that in these 7 months ‘Suryavanshi’, ‘83’, ‘Coolie No. Many big Hindi films like ‘1’, ‘Lakshmi Boma’, ‘Radhey: Your Most Wanted Brother’, ‘Bhuj: The Pride of India’, ‘The Big Bull’ and ‘Sadaq 2’ came on the screen and the collection of these films alone is around 1500. It would have cost crores of rupees. 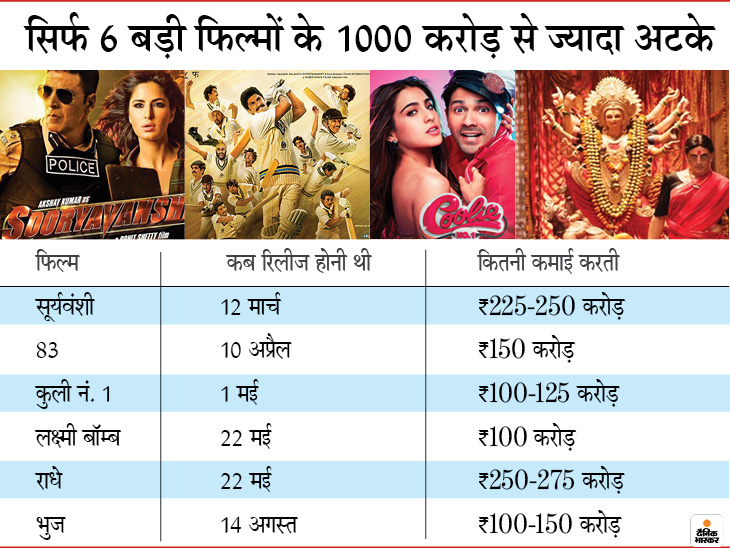 Movies like ‘Gulo Sitabo’, ‘Gunjan Saxena’, ‘Shakuntala Devi’, ‘Sadaq 2’ have been released on OTT’s platform. ‘Lakshmi Boma’, ‘Coolie no. Several more films like ‘1’, ‘Bhuj: Pride of India’ have also been contracted with the online platform, which may be released in the coming weeks.

According to Raj Bansal, two average and small budget pictures are published every week, which averages Rs 25-30 crore. Under such circumstances, if we count 29 weeks (till September 30), about 56 films would have come on the screen and their total revenue would have been around Rs.

Bhansal says many big films in Tamil and Telugu were also suspended during the lockout. If these pictures were released, their earnings would be around Rs 1500 crore.

Some Tamil-Telugu films, the release date of which has been postponed

Until now in 2020, theaters were only open for days3 days. At that time, the box office had a collection of about 824 crore. However, only one film was a hit and that was Ajay Devgn starrer ‘Tanhaji: The Unsung Warrior’, which grossed around Rs 260 crore at the box office.