The petition was filed. In the same case, it was learned through RTI that the Brihannumbai Municipal Corporation has so far paid Rs 72 lakh to the legal team to file a case against the actress.

Mumbai-based RTI activist Sharad Yadav sought information on which lawyer was hired by the Mumbai Municipal Corporation and how much he was paid in return for an application filed by Kangana Ranaut.

In reply, BMC said, “Akanksha Chinoy has been appointed as a lawyer to advocate in the High Court of the case. According to the law department of the municipality, she was given Rs 50,000 reward on September 22 and 3 times. She was paid Rs 850,000 on October 8.

Kangana said – public money has been spent for TG

Following the release, actress Kangana Ranaut targeted the Maharashtra government in a tweet on Wednesday. The actress wrote in her tweet, ‘So far Rs 62 lakh has been spent by the Municipal Corporation for illegal vandalism in my house. “Pappu of Paap spent public money to harass a girl. Today Maharashtra stands in this place. It is very unfortunate.” 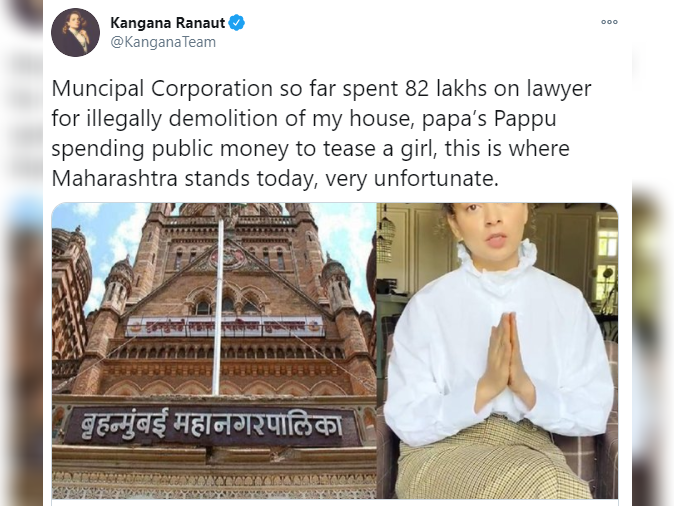 1. Penguins II. For all the lawyers who sued Kangana

What’s left now? Their children will also marry with our money.

That’s great! The people of Mumbai pay taxes for this ..
1.) Penguins
2) The lawyer in the Kanganas case